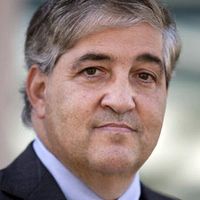 Owner and Chairman of the Tampa Bay Lightning

Jeff Vinik is the owner and chairman of the Tampa Bay Lightning of the National Hockey League, and serves on the NHL Board of Governors and the League’s Executive Committee. In addition, Mr. Vinik is the chairman of American Investment Holdings (AIH), a multipurpose investment enterprise he founded in 2013. Through AIH and other personal activities at his office in Tampa, Florida, Mr. Vinik manages his family's various investments, oversees (along with his wife Penny) the Vinik Family Foundation, and is part owner of Strategic Property Partners, his local real estate entity that, in partnership with Cascade Investment, is undertaking a $2 billion mixed use development project to revitalize downtown Tampa.

Mr. Vinik has worked in the investment management business his entire career, beginning at Fidelity Investments in 1986. Mr. Vinik progressed from researching the Oil Services Industry as an Equity Analyst (1986-1988) to being named an Assistant Portfolio Manager to Peter Lynch (1988-1989). Mr. Vinik was subsequently promoted to manage Fidelity's Contrafund (1989-1990), Growth & Income Fund (1990-1992) and Magellan Fund (1992-1996). Additionally, during his tenure at the helm of the Magellan Fund, Mr. Vinik was twice named the "Portfolio Manager of the Year", first by Morningstar in 1993 and by Mutual Fund Magazine in 1995. In 1996, Mr. Vinik left Fidelity to establish his own firm, Vinik Asset Management, a long-short equities hedge fund based in Boston. Over a period of 17 years he delivered net returns of almost 15% per year, growing assets under management from $800 million in 1996 to just under $10 billion. In 2013, Mr. Vinik returned all outside investor assets and closed Vinik Asset Management to focus his efforts on his growing business interests in Tampa.

Mr. Vinik earned his bachelor's of science degree in engineering from Duke University in 1981, where he graduated Phi Beta Kappa and an MBA from Harvard Business School in 1985. Mr. Vinik is actively involved in a number of charitable organizations, with a particular focus on providing support for children and basic human needs. With this in mind, together with his wife Penny he established the Tampa Bay Lightning Community Hero program, to provide support and recognition to those individuals who are improving the lives of the neediest members of the Tampa Bay community.