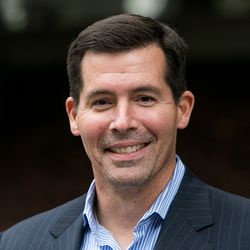 Carter received his early training in the restaurant division of PepsiCo, Inc. (Pizza Hut International and Taco Bell) from 1986-1990 and then at Frito-Lay from 1992-1997, where he became director of Marketing, managing the $1.5 billion tortilla chip category and launching Tostitos salsas and dips. Carter then served as vice president of product marketing and marketing communications at Electronic Arts, launching products like SimCity 3000 and The Sims. He left to become a member of the start-up team for Blue Nile Inc., a Kleiner-Perkins and Trinity Ventures backed company, which became the leading online retailer of diamonds and fine jewelry, selling in excess of $250 million after seven years in existence. Carter was Blue Nile’s senior vice president of marketing, merchandising and site when the company was named one of the forty best e-commerce sites by Forbes magazine. Carter developed the brand and site identity, as well as the marketing communication and product assortment strategy.

Carter left Blue Nile to be part of the launch team at Walmart.com, a division of Walmart Stores, Inc. He served as the vice president of marketing from 2000-2002 and the senior vice president of marketing, merchandising, creative and site from 2002-2005. In 2005 Carter was promoted to President of Walmart.com and to CEO in February of 2006. He led Walmart’s e-commerce division to profitability on its way to becoming the third highest volume e-tail site behind eBay and Amazon.com. Carter left Walmart to join Netshops.com, a privately-held ecommerce company funded by Sequoia Capital and Insight Venture Partners, as President and CEO. In 2009, Netshops rebranded and redesigned its site, becoming Hayneedle. Internet Retailer named it as one of America’s Hot 100 Retail sites in December of 2009.

In 2011, Carter joined the faculty of Northwestern University’s Kellogg School of Management, where he is a clinical professor, teaching entrepreneurship and marketing. In addition to teaching, Carter joined New World Ventures in 2012, where he is a venture partner, advising NWV’s portfolio companies. Carter sits on the board of SMS Assist, a Pritzker Group Venture Capital portfolio company and is also a member of the advisory board of Northwestern University’s Kellogg Innovation Network. Carter graduated from Stanford University in 1985 and the Kellogg Graduate School of Management in 1992.